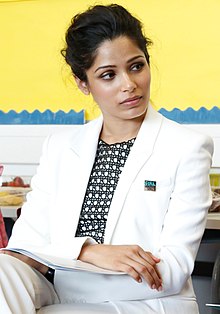 Freida Selena Pinto (born 18 October 1984) is an Indian actress who has appeared mainly in American and British films. Born and raised in Bombay, Maharashtra, she resolved at a young age to become an actress. As a student at St. Xavier's College, Mumbai, she took part in amateur plays. After graduation, she briefly worked as a model and then as a television presenter.