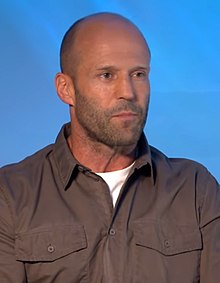 Jason Statham (born 26 July 1967) is an English actor. Typecast as an antihero, he is known for action-thriller films and portraying tough, irredeemable, and machiavellian characters.

Statham began practising Chinese martial arts, kickboxing, and karate recreationally in his youth while working at local market stalls. An avid footballer and diver, he was a member of Britain's national diving team and competed for England in the 1990 Commonwealth Games. Shortly after, he was asked to model for French Connection, Tommy Hilfiger, and Levi's in various advertising campaigns. His past history working at market stalls inspired his casting in the Guy Ritchie crime films Lock, Stock and Two Smoking Barrels (1998) and Snatch (2000).