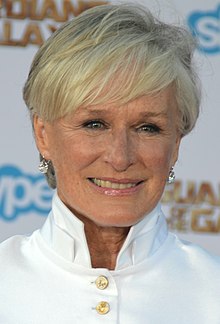 Glenn Close (born March 19, 1947) is an American actress. Throughout her career spanning over four decades, Close has garnered numerous accolades, including two Screen Actors Guild Awards, three Golden Globe Awards, three Primetime Emmy Awards, and three Tony Awards. Additionally, she has been nominated eight times for an Academy Award, holding the record for the most nominations in an acting category without a win (tied with Peter O'Toole). With her eighth nomination in 2021, she became one of the five most-nominated actresses in Academy history. In 2016, she was inducted into the American Theater Hall of Fame, and in 2019, Time magazine named her one of the 100 most influential people in the world.