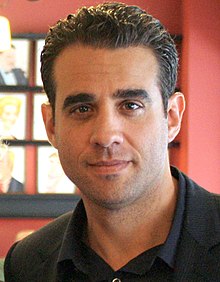 Robert Michael Cannavale (born May 3, 1970) is an American actor. He is known for various film, stage, and television roles, including regular or recurring roles in Third Watch, Boardwalk Empire, Vinyl, Will & Grace, Mr. Robot, and Master of None. Cannavale had a recurring role on the NBC comedy series Will & Grace as Will Truman's long-term boyfriend Officer Vincent "Vince" D'Angelo, for which he won the 2005 Primetime Emmy Award for Outstanding Guest Actor in a Comedy Series.[1] He also portrayed Gyp Rosetti during the third season of the HBO drama series Boardwalk Empire, for which he won the 2013 Primetime Emmy Award for Outstanding Supporting Actor in a Drama Series.[2] In 2016, he starred in the HBO drama series Vinyl, produced by Martin Scorsese and Mick Jagger. In 2017, he joined the cast of the USA Network drama series Mr. Robot during its third season. The following year, Cannavale portrayed Colin Belfast in the Amazon Prime Video psychological thriller series Homecoming (2018–present). For his roles in Mauritius and The Motherf***r with the Hat, Cannavale was nominated for the Tony Award for Best Featured Actor in a Play and the Tony Award for Best Actor in a Play, respectively. He has appeared in Tom McCarthy's The Station Agent (2003), Woody Allen's Blue Jasmine (2013), Paul Feig's Spy (2015), Marvel's Ant-Man (2015), I, Tonya (2017), Jumanji: Welcome to the Jungle (2017), and Martin Scorsese's The Irishman (2019).